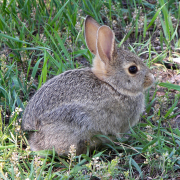 A new strain of Rabbit Viral Haemorrhagic Disease has been identified in rabbits in the UK!

Rabbit Viral Haemorrhagic Disease (RVHD1) and BVA, BSAVA and BVZS are working with animal welfare organisations and owners to ensure rabbits are protected against this potentially devastating disease.

Vaccines for the original strain of RVHD do not appear to offer long term protection against RVHD2, however vaccines for this new strain are now available in the UK and Jersey.

There have been supply issues with this vaccination, however these are hoping to be remedied soon.

RVHD2 is more variable in its rate of disease progression than RVHD1, with presentation ranging from sudden death (with or without bleeding from the orifices), to a longer disease course of three to nine days, increasing the risk of unwell rabbits being brought into practices and in turn increasing the risk of transmission to other pet rabbits.

Until vaccination becomes more routine, avoiding the risk of infection is important!

Sean Wensley, BVA President, said: “Although the risk of a rabbit contracting RVHD2 appears highest in situations where rabbits are kept in large groups with regular new additions, such as at breeders or rescue centres, we encourage all owners to speak to their vet about vaccinating their rabbits against RVHD2.

“Veterinary advice from The Rabbit Welfare Association and Fund (RWAF) has stated that the spread of RVHD2 may be facilitated by its apparent slower disease progression compared to RVHD1, and research suggests that we can expect to see RVHD2 starting to predominate in the UK’s wild rabbits over RVHD1 in the next five years or so.”

“BSAVA would encourage practices to talk to rabbit owning clients about RVHD2 vaccines, and where there is deemed sufficient risk recommend the vaccine along with the essential vaccination against Myxomatosis – and it should be noted that this must not be done within two weeks of vaccination against RVHD2.”

“It is clear from post mortem examinations and PCR testing over the last 18 months that RVHD2 is now geographically widespread in the UK and all rabbits should be considered at risk from this potentially devastating disease.”’

So far there have been NO reported cases in Jersey!

Want to join the discussion?
Feel free to contribute!